April 2, 2018
The following article first appeared on TELUS Health’s blog on January 17, 2018.
Canada’s population is aging and every province (including Manitoba) forecasts increased healthcare costs in the near future. Considering how many governments already struggle with deficits, the need to spend healthcare dollars effectively has never been higher.

On Friday, April 27 your Winnipeg Chamber invites you to a healthy discussion with Josh Blair on combining private sector solutions with public priorities. As the VP of TELUS Health, he oversees a team of innovators and medical professionals creating technology based solutions that reduce delivery costs while improving health costs for Canadians.

We asked him to share a taste of some of the solutions his team have put forward:

After years of sorting through paper charts, three physicians in different communities across the country all had the same thought: there had to be a better way to store and access patient information. Balancing their time to care for their patients while also writing code, each doctor put idea into action to bring electronic medical records to life.
​
After years of fine-tuning, Dr. Jim Kavanagh, Dr. Brendan Byrne and Dr. Michel Hébert, now TELUS Health team members, built three platforms for Electronic Medical Records (EMRs) now used by thousands of physicians in British Columbia, Alberta, Ontario and Quebec. 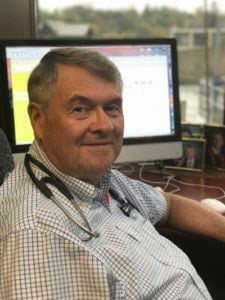 With both a medical degree and a degree in mathematics and computer science, Jim Kavanagh knew he could enhance patient care by automating his work. In his basement more than 36 years ago, the Cambridge, Ontario physician alongside his wife Barb, started off by programming patient schedules on a computer, which back then was an anomaly.

Realizing more could be done to simplify his day, Jim engineered an EMR solution to optimize his medical practice.

“I became a doctor because I wanted to help others. I knew what was required to provide good care,” says Jim.  The EMR I built made things easier and more accurate. Whether I need to pull up a patient’s full history, or understand a prescription’s side effect, it all became possible right in the tool. For me, it’s all about giving the best care possible and technology amplifies the experience.”

What Jim created is known today as PS Suite. His solution has evolved over the years, thanks in large part to program updates by a team of developers which included his son and daughter. TELUS purchased PS Suite in 2013 and today, with more than 41 years of experience as a family doctor and 36 years of practice as an EMR architect, Jim continues to practice medicine and help TELUS Health design EMR programs. 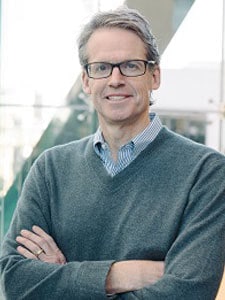 ​Brendan Byrne didn’t have a computer in the early 1990s, but he couldn’t help but notice significant changes happening all around him. The power of information was growing and he was perplexed as to why patient data was sitting unused in charts.

“After I finished my studies at Yale and later med school at McGill, I travelled around British Columbia and couldn’t believe the amount of critical data just sitting idle in patient charts,” says Branden “I felt it was my duty as a doctor to give the best care possible and I couldn’t stop thinking about all that information “I really had no idea what I was getting myself into, but after trying my hand at writing some code, I got the hang of it.”
Inspired to keep coding, Brendan ended up designing what we refer to today as the Wolf EMR platform. Scribing notes by hand on paper became a thing of the past. And not just that, he and other doctors were redefining proactive patient care by leveraging data in his EMR tool.

TELUS purchased Wolf in 2012 and Brendan joined the TELUS Health leadership team while remaining a part-time physician in Surrey, B.C.  Today, he continues to enjoy the best of both worlds as Chief Innovation Officer and as a family doctor. As founder of Wellness Garage, a precision lifestyle medicine practice, Brendan spends time with close to 100 patients to boost their physical, mental and social well-being. 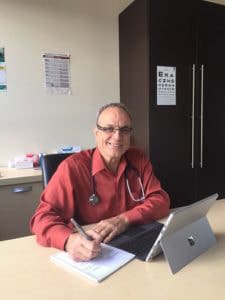 For Michel Hébert his EMR story goes back 18 years. Going digital was the obvious solution to eliminating tedious paperwork. After sketching out some ideas late one night alongside his wife, Kathleen, in their Quebec City home, the KinLogix EMR idea was conceived.

“I chose to become a doctor because caring for others is part of my DNA. When I first created my first digital patient chart, the excitement was real. I think I called everyone I knew. I was thrilled! My vision to curb manual work became a reality and I was empowering other doctors to do the same. I look back on that time with great pride.”
​
His homegrown solution gained popularity – doctors throughout the province were taking notice of the flexibility added to their day. What’s more, KinLogix was the first EMR in Quebec to go mobile – no matter where a doctor is, patient information is accessible while on the go. This type of innovation led Michel’s technology to gain major market share, and in 2012, KinLogix EMR joined the TELUS Health portfolio of solutions. Today, Michel offers strategic guidance to the TELUS team as Medical Director while also caring for his patients. 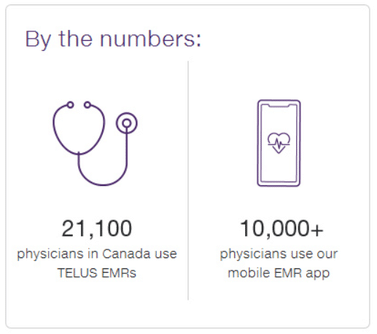 Working in collaboration with each other and their colleagues, Jim, Brendan and Michel are helping TELUS Health advance the next generation of healthcare solutions. The voice of the patient remains at the core of their work and all three say they’re proud of their lasting legacies.

“It’s privilege to have Jim, Brendan and Michel working with us at TELUS. Their innovation set a strong foundation and by building on their progress as we advance our EMR strategy, we’re enabling better experiences for physicians, and in turn, helping create better health outcomes for Canadians,” says Paul Lepage