Why CN loves coming through Winnipeg 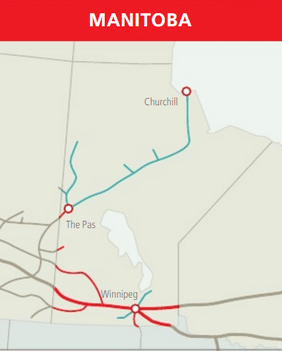 ​Manitoba is a major hub of CN’s transcontinental rail network. Much of our trafﬁc passes through Winnipeg’s Symington Yard. Winnipeg is also home to Transcona Shops, our main Canadian railcar and locomotive repair facility, and our rail plant. In Winnipeg, we also have CargoFlo® bulk handling, forest products and automotive distribution facilities, and an intermodal terminal.

CN signed a 10-year contract with Amsted Rail to produce one million railcar wheels for Transcona Shops. The new wheels will be produced using 100 per cent recycled steel in Winnipeg, providing high-quality jobs there. In 2016, we invested about $90 million to strengthen our rail network and support safety, efﬁciency and long-term growth in Manitoba. The program focused on the replacement and upgrade of rail, ties and ballast, plus bridge maintenance, level crossing rehabilitations, signal upgrades, and improvements at Transcona Shops.

Community Investments
In 2016, CN invested almost $400,000 in 32 Manitoba-based organizations, including:

Canadian Mental Health Association
The CMHA held its first ride-a-thon in Winnipeg to help people in the community get the best possible care and support in their recovery from mental illness.

Royal Manitoba Theatre Centre
Deeply rooted in the province of Manitoba, the centre aspires to both reflect and inform the community it serves by providing affordable and accessible performances of the highest calibre