What we told Canada’s Senate about your taxes 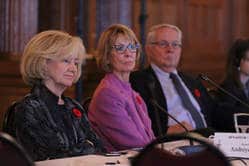 Last week the Standing Senate Committee on National Finance swung through Winnipeg as they continued their study of the proposed private corporation taxation changes. The Winnipeg Chamber of Commerce was extremely honoured and pleased to be invited to present to the committee.

Board member Mark Jones presented on behalf of your Chamber, drawing on his considerable subject matter expertise. While the changes announced in the third week of October were acknowledged as improvements, The Winnipeg Chamber still asked for the government to take all the changes off the table and hit pause. Over 21,000 Canadians submitted ideas during the paltry 75-day consultation period, and these new changes were introduced only two short weeks later. How could one possibly take into account all those views and suggestions in just two weeks?

The Winnipeg Chamber of Commerce also called for a federal tax reform commission to review our entire tax system. The last commission happened over 50 years ago, led by Kenneth Carter. Such a commission would work to make sure our tax system:
​

Economic competitors (such as France) have recently made major tax cuts, while American congressional Republicans are set on bringing forth major tax reductions south of the border. We can’t remain complacent as a country while others look to reduce the tax burden both businesses and individuals face.  These federal changes are a step in the wrong direction to maintaining our country’s competitiveness.