Torque Brewing a Pioneer for Craft Beer in Manitoba 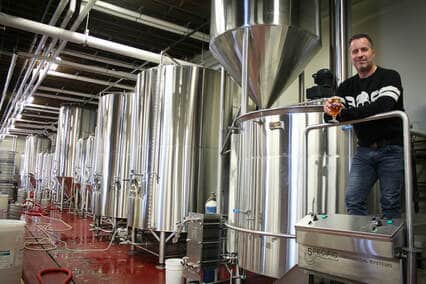 When Torque Brewing first stepped onto the scene in Manitoba in 2015, the craft brewery landscape in the province was about as barren as could be. Fort Garry Brewing had been around since 1930, and Half Pints Brewing Company was really the only other brewery in town, while other provinces in Canada had seemingly already clued in to the potential of craft beer.

“You go to Vancouver and there’s 250 breweries in B.C., you go to Toronto and go to a local pub, you won’t see Bud Light anywhere,” says John Heim, president of Torque Brewing. “You see these great tap handles and great beer styles and things you’ve never heard of; people are talking and they’re excited about beer.
​
“As I traveled, I was trying IPAs from Minneapolis, Vancouver, Seattle, Ottawa, and then I’d come back to Winnipeg and it was always just same old, same old. And it just seemed that Manitoba, in general, was ready.”

Ready indeed, as there are now currently 16 craft breweries in Manitoba. But still miles to go, with the beer market in Manitoba being roughly $350 million, and local beer accounting for about five per cent of that.

The appeal of locally brewed beer is multi-layered, according to Heim, beginning with the simple philosophy of supporting your local economy.

“It helps local business owners pay for their mortgage, put their kids through school, and the domino effect is that we hire local HVAC guys, guys to fix our taps; the spinoff is exponential.”

Craft Breweries like Torque will also offer varieties of beer you can’t find anywhere else, or possibly even ever again.

“We bought a small brewing system that allowed us to do 300 litres at a time, instead of 3,000 litres, so the guys can buy a little more intricate ingredients,” Heim says, explaining the appeal of Torque’s on-site taproom. “We can do beer infused with chai, we’ve done some tea beers, some milkshake stouts, some really interesting beer that people come here specifically for.”

The team at Torque keeps a finger on the pulse of beer trends around the world, and has offered more than 150 different beers since opening, including New England IPAs, sour beers, barrel-aged stouts, a spicy Mexican chocolate beer infused with habaneros and ghost peppers, and they even won the gold medal in the ‘Herb and Spice’ category for the 2018 Canadian Brewing Awards for their gruit beer Borealis.

“Gruit is a style of beer they used to do before they found out that hops had a preservative and flavoring component to them,” Heim explains. “So they were brewed regionally, using botanicals that you’d find in your region. In our case we used yarrow, bog myrtle, lavender and juniper berries. There’s no hops whatsoever.”

The local brewery has also been releasing an American pale ale called Foundation for the past two years now, which sees $4 for every case sold donated to a local charity of their choosing.

“We do a 12-pack in a 12 oz. can, and we commit to giving $10,000 back to our charity,” Heim says. “First year we did it for Habitat for Humanity, last year was the Never Alone Foundation, and this year we’re donating to Sunshine House.

“We can’t ask people to buy local if we’re not giving not back locally.”
​
For more information on Torque Brewing, you can visit their website at https://torquebrewing.beer

SEVEN REASONS TO GET YOUR SEASON SEATS

Each month hundreds of businesses come together and network at our Membership Luncheon series. To make it easy for you, we offer our members season seats to all 10 of…

A Spirit of Community

4- minute read What does the spirit of Winnipeg mean? Community? Celebration? Giving back? Innovation? For Chamber member, LITE (Local Investment Towards Employment), it means all of that and more. …

4-minute read Over the last ten years, Chamber member, Coelement, has been producing the videos and graphics for our Spirit of Winnipeg Awards, which are all about celebrating our Winnipeg…