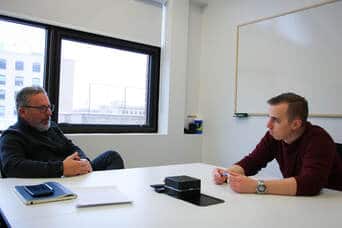 If you ever find yourself questioning Kevin Edwards’ – CEO of SkipTheDishes – dedication to Winnipeg, remember this; when he got the call to come to the city and join Skip as its chief marketing officer in 2018, he was in Melbourne, Australia. And it was February.

“Who wouldn’t take that call,” Edwards says, chuckling. “Essentially they were looking to take the brand from this emerging, folksy little prairie brand, which was really not what they were at all, that was just the perception. There are a lot of amazing people here that had done some unbelievable work so when I got here the foundation was already set and we were able to have some fun pretty quickly.”

Born and raised in Toronto, Edwards brought nearly 30 years of marketing experience to Skip, and quickly discovered the ‘secret sauce’ behind the company’s tremendous growth and success.

“My first impression was the most important one here, and that was just how smart everyone is here. And committed. And ferocious. I mean, you just don’t get to where we are without having people like that.

“It’s hard to say that a business that was going to do as many orders as they did in 2018 had ‘untapped potential,’ but there was so much potential and we’ve shown that as we’ve expanded across Canada and into 130 markets now, 23,000 restaurants. So I was really excited to be there, it was such a cool place to be; young people, and just super smart teams.”

At that time, Skip had all but perfected its delivery platform, and was ready to expand into some larger markets like Toronto. But no matter how great its product was, it would still need to tackle the tremendous challenge of taking on competitors who were already well-established within the market.

“We were lucky to have found Jon [Hamm] at a time when we were actually pursuing some other celebrities, and he became available to us. He was so easy to work with, and he also has a genuine love of Canada; he is a huge hockey fan. He actually was asking us questions – the very first time we sat down to talk with him – about the Jets. He was asking about Patrik Laine, he was very intuitive. It’s almost kismet what happened. We had some very funny scripts that were intended for a Canadian that we merely adapted for someone who wasn’t, and he ran with it.”

Towards the end of 2018, Edwards took over as CEO of the company from Chris Simair, one of the original founders.

Looking to the future, he’s not anticipating Skip’s growth to slow down anytime soon, and is looking forward to doing it all from the city where the company was born, recently announcing that Skip would open its new Canadian headquarters in True North Square in 2020.

“Winnipeg was our first big market and Winnipeg is not only our single biggest market by market share per capita, but it’s our home,” Edwards says. “I can’t imagine anything more exciting than the business that was built here actually staying here. This is going to be our home for a long period of time.

Edwards will be the keynote speaker at The Winnipeg Chamber of Commerce’s luncheon coming up on February 20, and is looking forward to sharing Skip’s success story with the city’s business community.

“You can do it here. Winnipeggers are very modest people. I think Winnipeggers know that there’s lots of innovation here, and there’s an entrepreneurial spirit here. I think for Skip, it’s exciting that we can be a national reminder of that. To have been born and raised here in Winnipeg and be featured on the national stage, that should tell other Winnipeg businesses who are thinking of doing it here or thinking of expanding outside of here, that you can build and sustain a business from Winnipeg. We have all of the talent here, but people will also come here.”

And as for Edwards’ go-to restaurant when he opens up his SkipTheDishes app?

“That’s a hard one, but I’m going to give you Yafa Café on Portage. It’s amazing, it really is. I love it.
​
“I’ve got to say, there are some killer restaurants in Winnipeg. One of the most underappreciated fine dining – or any kind of dining – places in Canada.”