January 30, 2018
​The Winnipeg Chamber of Commerce has long been a platform for thought provoking dialogue on some of our community’s most pressing issues and challenges.  True to form, last December, The Winnipeg Chamber of Commerce’s annual “State of the Province Address” featured a “Food for Thought” presentation by Chamber Chair Johanna Hurme. The presentation, titled “Business Case Against Sprawl” certainly provoked discussion and debate among the members of the residential development and construction industry in attendance.
In the spirit of continuing the discussion and adding further “Food for Thought” the Manitoba Home Builders’ Association has put together reasons why now is the right time to build a new home and why Winnipeg needs a better, fact-based plan for residential growth:
Invest in your community and your family’s future | Building a new home is the single largest investment most Manitoba families make.  Home values continue to increase in Winnipeg, which has helped ensure a healthy return on the investment made when someone builds a new home.  In 2016, over $2.7 billion of residential construction activity took place in Winnipeg.  Housing construction was responsible for over 16,000 jobs in Winnipeg earning over $915 million in wages.  These are major investments with a major impact on our city’s entire economy. 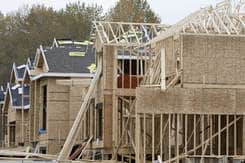 Growth actually more than pays for growth | All of the infrastructure that goes into new developments are paid for by the developer, not by the City of Winnipeg.  Every road, every pipe and drain, the sewer and water lines, the greenspaces, the trees, right down to the fire hydrants are outlined and approved by the City in each Development Agreement they have with the developer of a new development project.  Property taxes are among the highest on the new homes built in these communities while service levels (such as community clubs, transit, etc.) are the lowest. So new developments not only pay for their own infrastructure needs, they provide a significant amount of revenue that helps renew older infrastructure in other parts of the City.  Let us not forget that major investments by all three levels of government to help build major trade corridors like the Route 90 extension to facilitate trade both west and south of Winnipeg were done for economic development, not residential development.
New developments = new density | It may surprise you that many of the areas in Winnipeg with the greatest population density are the newest communities and developments. Multi-family developments, town houses, condos and apartments are common and prominent features in Winnipeg’s fastest growing neighbourhoods. Winnipeg’s density growth is happening in newer communities, not in our established neighbourhoods. The NIMBY (Not In My Back Yard) mentality, the lack of certainty around which densification projects will be allowed, and the lack of sufficient infrastructure in existing neighbourhoods all deter greater density in older parts of Winnipeg. 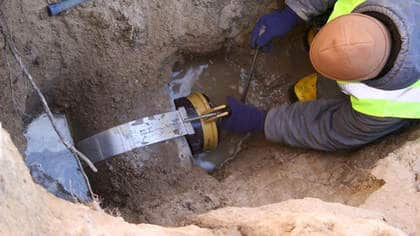 Old Infrastructure can’t necessarily handle greater density | While it would be great to build greater density in many of Winnipeg’s older neighbourhoods, it can be challenging as older infrastructure may not have the capacity to service new apartments or condos. Sewer and water pipes in some cases are 50 to 60 years old and were built to serve a neighbourhood of single-family homes.  The sewer and water infrastructure capacity in an area may not be adequate to add an apartment block that replaces 2 or 3 single family homes or to retrofit a warehouse into high end condos.  And keep in mind that the cost of replacing antiquated and insufficient infrastructure in order to facilitate new infill developments are born by the developer, not the City of Winnipeg.
Lifestyle choices | Simply put, not everyone in Winnipeg works downtown and not everyone wants to live downtown.  While the “all roads lead to downtown” mentality is fairly prevalent in the current discourse, many of us don’t work downtown. Our offices, businesses, schools, and workplaces are in other parts of the city.  For many Winnipeggers, myself included, having a discussion about “living closer to work” does not involve planning a daily trip to Portage and Main.
30 minutes from anywhere | Even with our recent growth, Winnipeg remains a relatively easy city to commute to downtown in when we compare ourselves to cities like Edmonton and Ottawa.  Certainly, compared to Toronto or Vancouver, Winnipeg is easy to move around in.  We agree that as we grow, a solid plan to maintain this advantage is vitally important.
Space makes Winnipeg attractive | Winnipeg has seen a tremendous increase in immigration since 2011. Many new Canadians have chosen Winnipeg as the place to make their family’s new home and have driven much of the growth in many of Winnipeg’s newer developments like Amber Trails, Sage Creek and Bridgwater.  This is not because of a lack of options, but rather because the lifestyle these communities provide is very attractive to those families who are looking to establish Winnipeg as their new home. 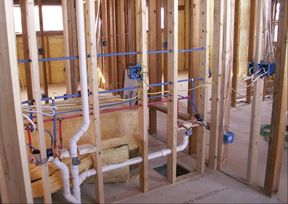 Lower greenhouse gas emissions | Homes built today in Winnipeg are amongst the most energy efficient homes anywhere in North America.  New building code standards, technology and materials continue to increase the energy efficiency of new homes as they are built.  Even with the growth we have experienced, Winnipeg continues to have one of the oldest housing stocks in Canada, and the annual cost of heating older homes in Winnipeg’s established neighbourhoods can be more than double that of a new home.
Live in a healthier home | If you live in an older home, do you know what’s in your walls?  Today’s homes are built to standards that ensure a cleaner, healthier environment.  More efficient buildings and better building standards mean better air flow, better quality, and better safety for your family.
Beat the rate increases | Even with resent increases by the Bank of Canada, interest rates remain at very reasonable levels.  In fact, it would cost you more to carry a $200,000 mortgage in 1981 that it does to carry a $500,000 mortgage today.
​The discussion on how to grow our City should not be reduced to a “Downtown” vs “the rest” debate.
Winnipeg needs an inclusive and fact-based plan for growth.  Our city needs a plan based approach to growth that drives both economic and residential growth in a sustainable way and that is followed and implemented by our civic government to encourage confidence and investment.
The Winnipeg Chamber of Commerce is pleased to provide a platform for members to share their news, ideas and opinions. Editorial opinions are those of their respective authors and do not constitute official policy positions of The Winnipeg Chamber of Commerce.