April 10, 2018
As our upcoming event with Josh Blair and the TELUS Health team on innovative solutions to Canada’s healthcare issues approaches, we asked them to pick a pressing issue​ more Canadians should be aware of.
This is the second article in their Strong Foundations series, examining five non-negotiable foundations that will support and sustain a truly integrated healthcare ecosystem for Canadians. Its focus is the opportunity to tackle medication management challenges by enabling electronic communication between prescribing physicians, pharmacists, insurers and patients.It was first published by TELUS Health in January 2018.

​In Canada, we like to believe that our health system is among the best in the world. In many ways, it is. But there are aspects of our system that have fallen far behind the standard of practice in other countries. One of the laggards is the way we manage medications, which has an impact on patient safety, medication adherence and ultimately patient outcomes.

​Furthermore, in some States in the US, there are statutes that prohibit prescribing on paper. For example, New York State mandated that practitioners must prescribe electronically. In Maine, an act to prevent opiate abuse by strengthening prescription monitoring of controlled substances was introduced which requires that opioid prescriptions be sent electronically

Why has Canada been so slow?

I believe a major barrier to technology adoption is the fact that our Constitution assigns jurisdictional responsibility for healthcare to the Provincial governments. For many decades, that was a distinct advantage because healthcare decisions were made regionally, close to the people that were receiving the services. Supported by Federal transfer payments, the Provinces funded health care services that were truly world class for many years.

Yet over the last two decades, just as information technology became increasingly important for coordinated and effective care delivery, Canada has slipped in international rankings. Could there be a cause and effect relationship here?

​Information technology shows very strong economies of scale: proven, effective solutions can be adopted and applied on a large scale with relatively small incremental costs because hardware is so inexpensive. However, system requirements and standards that are different for each Province have made eHealth solutions very difficult to deliver on a national scale. The resulting patchwork of systems are costlier to manage, maintain and expand than a national platform would be. Several Provinces have worked diligently to implement drug information systems but have not succeeded in delivering electronic prescribing. National pharmacy retailers and software vendors are understandably reluctant to conform to 10 different provincial standards given the cost and complexity that would represent.

The result: everyone waits on the sidelines for a national standard solution to emerge. That is until recently.

​Bringing electronic prescribing to the nation

In 2017, Canada Health Infoway launched a solution called PrescribeIT™ that went live in August. It offers a single, national solution that will integrate with provincial drug repositories and provider registries. To-date, six Provinces and a range of pharmacy retailers have expressed a willingness to get on board. This is Canada’s best opportunity to close the electronic prescribing gap, compared to other developed countries.

Many are unaware of the full potential electronic prescribing offers to Canada’s healthcare system, ranging from improved patient safety, to increased medication adherence, to better collaboration between providers. Particular benefits include: 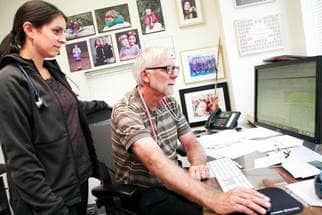 These are the benefits offered by the version of PrescribeIT™ to be deployed to physicians and pharmacists this year.

But this is only the beginning. Once Canada has the ePrescribing platform in place, there is so much more that can be done.

One of the big limitations of our current system of medication management is that none of the care givers sees a complete record of the medications a patient is taking.

The pharmacist does not see what prescriptions are filled in other pharmacies. And, in some Provinces, regulations and patient confidentiality agreements make data sharing between pharmacies challenging.

The physician only sees the prescriptions they have written personally. Those written by specialists, hospitals or walk-in clinics never get to the physician unless the patient shares the information and the physician takes the time to type it into the EMR.

The patient is the ultimate integrator of medication therapy, usually by means of a slip of paper with a list of medications or a plastic bag filled with pill bottles.

Some Provinces have created impressive drug repositories that have a complete record of the medications dispensed within their borders. Unfortunately, utilization of these valuable data sources by health providers is limited for reasons of convenience (i.e. the time it takes to log into another system is onerous) or lack of system access. Furthermore, these repositories lack information about unfilled prescriptions or discontinued medications, rendering them ineffective for addressing poor drug adherence.

Once electronic prescribing is widely adopted and integration with provincial drug information systems is in place, Canada will have the ability to progress other important capabilities, such as medication reconciliation. This will allow synchronization between EMRs, hospital systems, pharmacy systems and provincial repositories. All members of a care team (including the patient) would have access to the complete medication history for the first time. The safety benefits of this are dramatic, as drug-to-drug interaction checking against the entire medication list for each patient will be possible within the EMR. Further, adherence information will be available to all, allowing a more proactive approach to patient education.

The time to act is now

We know from other countries that it takes years to spread adoption of ePrescribing across an entire health system. As a nation, we need to move quickly to incorporate ePrescribing into practice. Provinces, pharmacies, hospitals and physicians need to put this to the top of their priority list in a coordinated effort to improve the performance of our health system. Many lives are depending on it.