April 4, 2018
The North American Free Trade Agreement (NAFTA) has been a tremendous boost to Canada, the U.S and Mexico’s economies since coming into force in 1994. Almost twenty million jobs between the three countries are reliant on trade. Over five million American jobs have been created due to NAFTA, and Canadian and Mexican direct investment into the U.S has grown tenfold over that time.
Given the incredible importance of the file, it was a pleasure for The Winnipeg Chamber of Commerce to host our Minister of Foreign Affairs, The Honourable Chrystia Freeland recently. Not only is managing Canada’s foreign relations difficult task at the best of times, Minister Freeland is leading the NAFTA re-negotiation with the U.S. and Mexico.
During a fireside chat with former Canadian Chamber of Commerce Chair Sean Finn, Minister Freeland shared some insights on what it is like to be on the front lines renegotiating arguably what has been the most successful trade deal of all time. Recent reports have indicated the talks have moved into overdrive, and there has been a newfound sense of urgency to get a deal down. 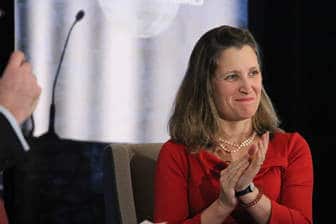 Minister Freeland was optimistic and upbeat, but reiterated that a deal isn’t done. She thanked Chambers of Commerce and businesses across Canada for their input during the negotiations, and noted she will always stand up for Canadian interests. Minister Freeland shared that she feels a lot of progress can be made in regards to reducing red tape for goods moving across the Canada-U.S. border in the negotiations. A lot of that comes from updating an agreement that is close to 25 years old. For example, the original NAFTA deal includes provisions around cassette players in cars.

Minister Freeland also shared some thoughts on recent unprecedented aggression by the Russian Federation, and Canada’s response. She also spoke about the creation of the Canada-U.S Council for Advancement of Women Entrepreneurs and Business Leaders and on increasing women in leadership roles. She shared that Canadian leadership is essential in this area, as we have to lead in the area or no-one else will.

Lastly the Minister left with the heart-warming message that the best part of her job is getting to represent our great country on a daily basis. Amidst global uncertainty, we sometimes forget just how lucky we are to call Canada home.