February 28, 2018
The Winnipeg Chamber: The City is embarking on a mandatory review of the OurWinnipeg 25-year plan, seeking public input on a range of items. From your perspective, what can the city do to promote a planned, livable city for the next twenty five years?
Mayor Bowman: This is a very opportune time to be taking a critical look at OurWinnipeg. Why? Because Winnipeg today finds itself in a strong and steady cycle of population growth. On average, population growth over the next 25 years in Winnipeg is estimated to increase by 8,200 people per year.
What this means is Winnipeg is expected to add the equivalent population of the City of Morden, each year, for the next 25 years. We need to be planning for this growth!

WC: As Mayor, you have helped ramp up infrastructure spending in Winnipeg. Right now there is $182 million ask to senior levels of government for more money to fix our roads over the next six years. Where do things stand?

MB: Millions of dollars in federal funding is currently sitting idle in a bank account when it could be used to fix many of our regional roads. The province simply has to endorse and submit to the federal government. Council’s unanimous proposal to access this funding, and regional road renewal across our city can be further bolstered. The federal budget has just been released, and Manitoba’s provincial budget is being released in early March. So, I remain hopeful that in this context we will see progress on this request.

Addressing our city’s infrastructure needs, and fixing our roads in particular, remain top priorities for many, many Winnipeggers. There remains a tremendous opportunity right now for federal, provincial, and city governments to work together and partner in rehabilitating Winnipeg’s regional roads, and there’s an opportunity to do it at no additional incremental cost to Winnipeg and Manitoba taxpayers! 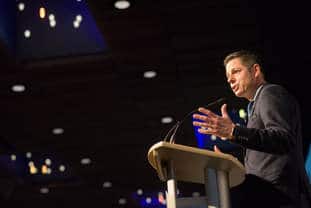 WC: NAFTA is a front burner issue for a lot of local businesses. How do you see your office playing a role in those discussions – and in promoting Winnipeg businesses globally?

MB: Winnipeg has always been a trading city, and open and free trade remains critically important for Winnipeg and Manitoba. Notwithstanding today’s trade rhetoric, I do believe cities and businesses, on both sides of the border, remain keenly interested in maintaining strong trade relationships. Canada remains the largest single export market for the U.S and vice versa. Nearly nine million American jobs depend on trade and investment with Canada, and almost two million Canadian jobs are related to Canadian exports to the United States.

So, it is more important than ever to be advocating against protectionist policies. And we have seen over the last year that Mayors and local officials can have an important role to play in advocating for free trade. The recent Bombardier-Boeing dispute underscored how local governments can play an important role in national issues, and how we can help build and strengthen partnerships between businesses and government stakeholders in Winnipeg and the United States.

At the end of the day, no two nations depend more on each other for their mutual prosperity and security than Canada and the United States. We represent one of the closest trading relationships between any two nations in the world. We have worked together as friends, allies, and partners on many different levels, and I remain committed to promoting that interdependence nationally and internationally.

WC: Over your term as Mayor you have successfully brought down the business tax in each successive budget. However, Winnipeg remains the only city with a business tax in Canada. What are the next steps in reducing taxes for small businesses, the job creators of our economy?

MB: Yes, I have remained committed to reducing Winnipeg’s business tax, and have done so each year since being elected. I’m not planning to deviate from that trajectory!

​You are correct that small businesses are the cornerstone of our economy. They assume an incredible amount of risk, they work hard, they’re significant employers, and at the same time are very active volunteers and sponsors of many different community events and initiatives. They power our economy, and they empower our communities!

WC: What has been your biggest accomplishment since taking over as Winnipeg’s 43rd Mayor in October 2014?

MB: I feel we’ve really returned a sense of pride to our city. Actually, pride in our city has always been there. What I’ve tried to do is better reflect the level of pride many Winnipeggers already feel about our city, and I’ve tried to raise these feelings to the surface for all to see. We are an incredible city!

​We are ethnically and economically diverse, we’re growing, we’re rebuilding after years of infrastructure neglect, and we’re building in a better and smarter way. There’s a lot to be proud of in Winnipeg, and I will continue promote this pride!

WC: What do you still want to accomplish this term?

MB: There is still more work to do to on an efficiency front as well as improving certain processes at the city. We know the permitting system remains one of the processes businesses are frustrated with even though we have made some improvements. And I know many taxpayers feel we can be more efficient with the money they send our way.

WC: What do you look forward to sharing with the Chamber’s membership at the State of the City?

MB: This is a great opportunity to provide an annual status report on the city. It’s also one of the best opportunities and to engage with business leaders who want to make our city an ever better place to do business, and I look forward to underscoring how Winnipeg continues to grow, and that we need to be planning and building today to support this growth.

WC: One last question, how far do the Jets go this year?

MB: I’m not normally superstitious, but I’m not taking any chances on this one! So, I’ll reserve comment!