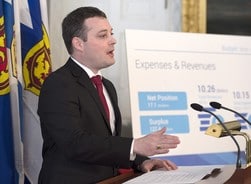 Nova Scotia recently brought down their 2017 budget, which included an increase to the small business threshold from $350,000 to $500,000. The threshold allows for small businesses to pay a reduced tax rate on their first $500,000 of income.

Why does that matter to Manitoba?

This is why the Winnipeg Chamber of Commerce recommends the province establish a tax commission. The tax system in Manitoba has not been reviewed in almost a generation. With a carbon tax coming and the government’s promise to reduce the PST to 7% in their first term, now is the time to step back and rethink our entire tax system. The review should be undertaken by a commission of independent experts tasked to ensure our tax system meets the cornerstones of a healthy, prosperous community-fairness, simplicity and competitiveness.

For further information on this and other Chamber advocacy initiatives, please contact Director of Advocacy, Michael Juce, at [email protected] or 204-944-3315. ​