Governor Poloz’s opinions relevant to us all: Sissons 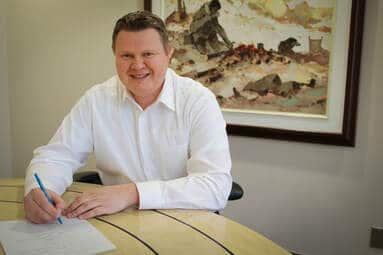 Scott Sissons, chair of The Winnipeg Chamber of Commerce and partner at KMPG.

With The Winnipeg Chamber of Commerce set to host Bank of Canada Governor Stephen Poloz at a special VIP luncheon in May, questions still remain as to what topics of conversation attendees can expect Governor Poloz to discuss during his ‘fireside chat.’

The Bank of Canada is set to release its latest economic projections on April 24, which will include an official announcement regarding the country’s interest rates for the next year.

“Depending on where your interest rates are, it’s going to drive what our dollar does, you know, in comparison to, say, the US currency,” says Scott Sissons, chair of The Winnipeg Chamber of Commerce and partner at KPMG. “People care about that if they’re importers or exporters. The pricing of goods, they care about. And certainly, the stock markets can react depending on what people like [Poloz’s] views are on life.”

Late last year, the World Economic Forum published its annual Global Competitiveness Report, which claims to, “measure national competitiveness — defined as the set of institutions, policies and factors that determine the level of productivity.”

“We were 12th this year, last year we were 10th; we’re going the wrong way,” Sissons says. “Our friends to the south are in first place, for the last two years. How do we match up with and try to compete with such a big economic player to the south of us?

“Leading up to an election year, what are they doing to ensure that we’re not just maintaining but improving our economic competitiveness? I don’t think that’s something that [Poloz] can control, but I’m certainly interested in what his thoughts are on that, and on what we should be doing better.”

Just in the past few weeks, international trade has stepped into the spotlight as a major area of concern for Manitobans, with China delivering non-compliance notifications to three major Canadian canola exporters, one being Richardson International Ltd., headquartered in Winnipeg.

“Agriculture is such a huge part of our economy in Manitoba. I think sometimes, living with the perimeter, people tend to forget that,” Sissons says. “Ag really drives the bus in this province, and this is a huge issue, not just for my friends upstairs at Richardson or over at Cargill, but for all the producers. This time of year everyone is trying to figure out their plan for crops, and if your biggest customer won’t take your product, that creates a lot of uncertainty for your average farmer out there.
​
“It’d be tough for anyone to say the actions of the Bank of Canada don’t impact all of us in some way, shape, or form, directly or indirectly. There’s just a ton of uncertainty out there right now, with where our economy is going globally, and it’d be good to get some insight from somebody a lot closer to things; for us to be worried about, or hopeful about, or cautious about.”