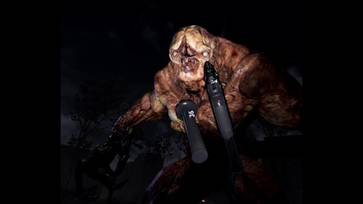 ​Chris Hall is giving Winnipeggers the opportunity fly through cityscapes, tackle obstacle courses in space, and take a shot at chasing zombies.

Hall is the owner and operator of The Portal, Winnipeg’s first virtual reality arcade, which he opened in October 2016.

Just months earlier during a trip home to the United Kingdom, one of Hall’s friends he calls “a bit of an early adopter” invited him over to try his new HTC Vive, a virtual reality headset that had just been released.

“I was absolutely blown away by it,” says Hall. “As anyone who tries virtual reality, it’s beyond what they imagine the technology is able to do by millions of per cent.”

Virtual reality is a computer-simulated 3D environment where users are able to interact with everything they can see, hear, touch, and sometimes smell by wearing a headset and holding controllers. 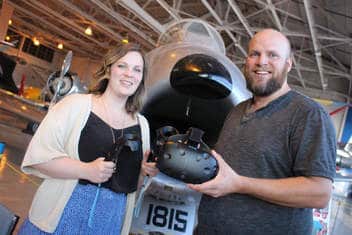 The Brookhaven Experiment, a zombie-shooter survival game, was one of the first games Hall played with his friend where zombies run at you in waves as you try to survive.

“It’s terrifying,” says Hall. “I smashed [my friend’s] low hanging light with my hand trying to stab a zombie at one point.”

Hall says it’s one of the most popular games they have at The Portal now, and there’s a lot more space to play it than what was in his friend’s apartment.

“It was the level of immersion that I felt playing that game that made me think it could be a business here,” says Hall. “It’s an expensive kit, it requires a lot of space, and it’s at the early-adopter stage.”

This was the excuse Hall needed to go out and get his own HTC Vive, and with his wife’s permission, they began building a business.

Hall’s wife, who’s from Winnipeg, is the reason he made his move across the pond. He was drinking in a pub when he signed up for a dodgeball team that, little did he know, had his future wife on the roster.

“And the rest is history,” says Hall. “I’m a very proud Winnipegger.”

After getting help with his business plan from Entrepreneurship Manitoba and Futurpreneur, Hall was faced with the obstacle of finding the right location for his new business.

The Portal was originally called “The Portage Portal” because their first location was in an office building on Portage Avenue, but with their equipment set up and a fresh coat of paint on the walls their occupancy permit fell through. 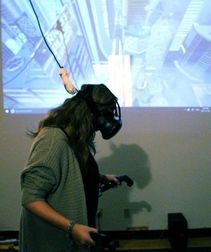 “We were within three days of opening, and had no location,” says Hall.

After a six-month stint in a small, shared space on Corydon, they found their new and current location in Winnipeg’s Exchange District on the seventh floor of an office building on McDermot Avenue.

“I really wanted to be in the Exchange District,” Hall says. “I like being part of the gentrification of the area.”

Now they have room for two groups at a time and have partnered with Pizzeria Gusto and The Merchant Kitchen for help with the food and drinks.

Hall is trying to change the stereotype around gaming by strongly encouraging group sessions at The Portal rather than the typical video game experience of playing by yourself. 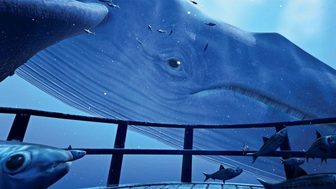 “It’s a social experience,” says Hall. “We want people to be able to have a drink and watch what’s going on.”

That goes for corporate groups as well as friends and couples on dates. Hall recalls his team setting up their mobile unit for the Young Presidents’ Organization holiday party in the basement of an Academy Avenue pizza restaurant with 36-hours’ notice… while he was traveling in the U.K.

“Apparently the plank experience – a simulation where you walk out on a wooden board 80 stories over the street – was a smash. The organizer reached out right after to set up a Christmas party partnership.”

Some of Hall’s favourite guests are a group of women he believed were in their seventies. They had their first virtual reality experience at The Portal with a retired game called theBlu that gives players the ability to explore the ocean and come face to face with whales.

Hall says the women took turns playing for over an hour.

“They were oohing and aahing,” Hall says. “The experience and the expressions that [people] make is absolutely fabulous.”