Exiting Europe and terminating NAFTA… have our trading partners lost it? 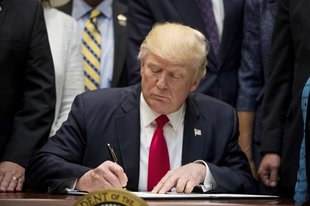 ​From Europe to the U.S.A., our largest trading partners are burning up with anti-trade fever. Is it a short-term flu of harmless populism or the most destructive strains of anti-globalization since the 1930’s?

Last week the Trump Administration leaked a draft executive order to withdraw the U.S. from NAFTA. “I was all set to terminate,” Trump told the Washington Post “I looked forward to terminating. I was going to do it.” What changed his mind?

He backed down after an uproar from U.S. business groups, ferocious blowback from Congress (Senator John McCain said it would be a “disaster”), and calls from the leaders of Canada and Mexico. Apparently the decisive factor was a map of the United States showing the areas that would be hardest hit from cancelling NAFTA and highlighting that many of those counties, particularly in agriculture and manufacturing had voted Trump last November. The blustery threat and same-day retraction inflamed public opinion in Canada and Mexico, so that it will be even harder for those governments to make concessions to the U.S. What could be nuttier?

Frexit. If France elects a President dedicated to exiting the European Union and abandoning the Euro, it would be much worse than Brexit, perhaps leading to a break-up of the EU. Should we be worried?

We will find out on May 7th when the people of France vote in the second round of the Presidential election. The parallels with the U.S. are striking – Marine Le Pen presents herself as a champion of the oppressed working class, les oubliés (“the forgotten”) and she promises to stop immigration, withdraw from the EU, and impose tariffs to protect French business. Her opponent, Mr. Macron is in the centrist Hillary position with somewhat vague promises that are proEU and include investments in training, along with more flexibility and lower taxes for French business. Mr. Macron has a massive lead in the polls, but analysts point to severe trauma in the French political system. From the Euro crisis and bank bailouts, to an influx of migrants, economic stagnation, and terrorist attacks, the French have never been more disenchanted with their elites. In fact, both of the major parties (the equivalents of the Liberals and Conservatives) were eliminated in the first round.

There’s been much talk about a world-wide trend of government elites losing to anti-trade populists, but don’t count on a big win for Madame Trump. Extremist candidates were defeated in The Netherlands and Austria, because of concern about the economic consequences and also because messages of openness do resonate. Polls show that significant numbers of Trump voters and Brexiteers are experiencing regret.

Personally, I think Ms. Le Pen has pushed her luck too far with a promise to exit the Euro. This means that all financial assets, debts and pensions would have to be converted from Euros to some new currency to be introduced by Ms. Le Pen. Hear that, French seniors? Your life savings could be devalued and switched into new Francs from the Front National. Good luck.

That’s the point of Brexit, Frexit, threats to withdraw from the EU/NAFTA and trade wars generally. It’s lots of fun to bluster and bash trade, but there are real consequences and real job losses. Sometimes we only see the benefits of free trade when someone threatens to take it away. So let’s hope the French come to the same conclusion as so many Dutch, Austrians, remorseful Brits and American businesses to embrace openness. Because despite all the uncertainty, faster growth in global trade is just around the corner.