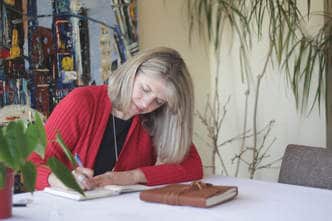 ​When Susan Kuz was introduced at a recent happiness workshop, she began by tackling one of the first questions she’s usually asked – how do you pronounce her business’ name Being Pukka?

“So it’s pronounced being puck-ka. It actually comes from a Hindu word and it means to be authentic, highest quality, genuine,” said Kuz.

Kuz has worked as a positivity practitioner and coach for eight years, helping individuals and corporate clients create positive change. After 25 years working in public and private corporations, Kuz decided she to pursue her calling when circumstances and a clear need coalesced.

“This has always been an area I’ve been interested in – since I was a teenager reading my first personal development book…. As I went through corporate life, I saw there was a need for this kind of mental wellness work.”

“I combined my passion with my corporate life. Just for fun I’d create workshops, discussions, I’d coach people because I had a passion for it. But a number of years ago I was downsized and I thought, well, now’s the time. I’m going to jump in with both feet. At the same time I came across more in depth training in the area, which gave me a stronger knowledge base than I had. Being Pukka evolved from that.”

Kuz used her seminar as an opportunity to discuss the impact happiness has on success in all areas in life with the people who attended.

“We had 12 things that they could do to immediately increase their happiness and they took away a short list for themselves that resonated with their lifestyle and the difference that it could make most immediately for them,” said Kuz, who draws on the work of happiness researcher, Sonja Lyubomirsky as well as others studying positive psychology.

Maintaining relationships, showing gratitude, and setting goals were some of the topics that she touched on.

The seminar was a good networking opportunity for Kuz, and she left her contact information for anyone who wanted to work with her to dive deeper into the program. Staying on top of business networking can requires a strong commitment – especially for independent entrepreneurs. Kuz says that while she runs Being Pukka by herself, she turns to a much wider support circle to keep motivated.”

“I have a mentor from my field who is tremendously motivating. He helps me to become clearer in my direction,” Kuz says. “He helps me keeps things simple and less cluttered, as opposed to always pursuing the newest idea in the field.”

“I also meet with people in the same field at conferences or through continuous learning events online around the U.S. or Australia or anywhere in the world. I find those ‘coffee discussions’ incredibly motivating, hearing from people who are doing similar things in the positive psychology realm.”

The Winnipeg Chamber of Commerce is also part of Kuz’s network, which she joined shortly after starting Being Pukka in 2015. “I really enjoyed the environment – especially the people there,” said Kuz. “That was the part I really loved – being connected to other business owners and people growing their businesses – and who are also coming there to meet other people and learn.”

Kuz said the best part of her job is helping people and hearing about the positive impacts her messages has on them personally and professionally.

“I’d worked with a gal who was a small business owner at the time,” Kuz says. “Her questions at the time were how to develop a work-life balance – because she was busy with her business but she also had a very young family.

“She came back to me months later so happy for the clarity on what was most important to her. Our work together helped her make decisions that enabled her to be so happy not just in her business, but in her personal life.”