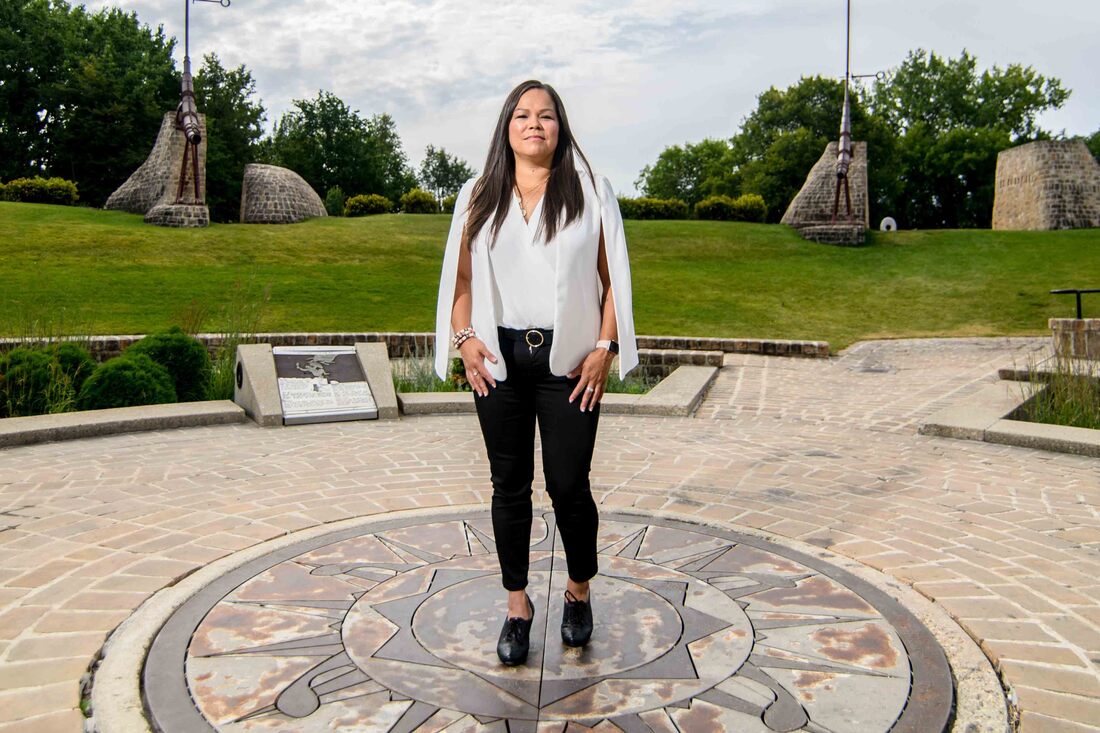 Photo by Mike Sudoma Photography.
Jessica Dumas has a pretty common story, but one not always told.

Growing up in the Point Douglas area of Winnipeg’s North End, Dumas didn’t see a lot of people who graduated high school, bought houses or owned a lot of things.

“In my community, poverty and having kids young were common. So for me to have my son at 19 was just kind of normal,” Dumas says. “In the society that I grew up in, I didn’t see the reflection of who I could be because I was already fearing what I saw in the community.”

“I grew up with really low self-esteem and was very quiet, but observant. I didn’t know why other people seemed to ‘have themselves together’ but we didn’t. And for that reason, I always seemed to be seeking something more.”

“I was determined to get a good job to support myself and my son and not use social assistance, which is how a lot of moms that I knew at the time were supporting themselves and their families. There was just something inside me that always said, ‘I don’t have to do it that way.’”

Dumas doesn’t remember her family or community ever talking about culture or identity, yet recalls seeing others elsewhere celebrating their unique identities, languages and cultures. After the death of her younger brother in 2005, Dumas began to educate herself about her own background as an Indigenous woman and the history of Indigenous peoples all across Canada.

“For a while when mourning my brother I got stuck in that spot of thinking ‘Why is this happening to me?’” Dumas recalls. “But then I had an intuitive experience and could feel I was going to be okay, and that my role was to help the people around me understand something deeper. I just needed to keep going and trust my life was going where it was supposed to be.”

“As an adult I started building relationships with the Indigenous community that I didn’t have as a child, and that was comforting. I finally felt like I belonged somewhere,” Dumas says. “That gave me the strength to be able to say ‘I’m an Indigenous professional’ and feel really good about that.”

In 2014 Dumas joined the Aboriginal Chamber of Commerce board of directors and served as chairperson for two years. The appointment gave her the opportunity to sit as an ex officio on The Winnipeg Chamber of Commerce’s board as well.

Dumas joined the Winnipeg Chamber as a member in 2015, with her business Jessica Dumas Training & Coaching, where she works as a certified life coach and master trainer, offering a variety of different coaching and training programs, including Awareness and Engagement programs.

“I work with two different audiences; on reserve with the Indigenous community I do a lot of communications and customer service training, and with the non-Indigenous community I’m doing a lot of Indigenous awareness and history which leads to consulting work,” Dumas says. “It’s two very different audiences, which is a really interesting place for me to be because when I’m with the Indigenous community working on reserve, they don’t always know what it’s like to be in a downtown board room. And when I’m working in the downtown board room, there are some people in the room who don’t know any Indigenous people. So it’s a really interesting opportunity for me.”

On October 3, 2019, Dumas will be sworn in as the new chair of The Winnipeg Chamber of Commerce.

Dumas says she hopes to use her time as chair of the Winnipeg Chamber to start some important conversations between Winnipeg’s business community and Indigenous community, continue to make strides towards reconciliation efforts and the Truth and Reconciliation Commission’s Call to Action #92, and inspire people to find passion and take pride in the work that they do.
​
“At the end of my time as chair, I think what I would like for people to remember about me is that I’m passionate about the work that I do, and I hope that that inspires other people to be more passionate about what they do and our entire community.”

If you’re a Winnipeg Chamber of Commerce member, don’t miss the opportunity to see Jessica Dumas sworn in as the new chair for 2019/20 at our Annual General Meeting on October 3. For full details and to reserve your seat, click here!

Post Contributed By: Michelle Gazze, Leadership Winnipeg Class of 2020-21 We are at an inflection point across the globe where many of us are thinking about how we can best…

Propel Your Business Towards Global Growth

The Trade Accelerator Program (TAP) is an intensive industry-led training program for current and prospective exporters. TAP is designed to accelerate the strategic development of your business, and to better…

Three new ways to introduce yourself

On October 29, Kerri Twigg will speak during our October Luncheon about Creating and Owning Your Business Story.  Before the Luncheon, she shared with us some insightful tips for you…

Post Contributed By: Harun Kibirige, Leadership Winnipeg Class of 2020-21 If there is one thing I believe in, it is the power of connectedness – a feeling and realization that…