Do you have job skills for an automated future?

March 26, 2018
This article and report first appeared on the Canadian Chamber of Commerce website March 26, 2018. 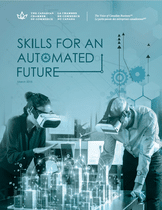 Automation, artificial intelligence and advanced robotics have the potential to either take over jobs or be the key to increased productivity and competitiveness, according to a new report from the Canadian Chamber of Commerce, Skills for an Automated Future. Only by bracing for the changes to come in the next decade can Canadian business take full advantage of the automation revolution.

“Between one-third and one-half of workers will be affected by automation in the next decade. Those changes do not have to be negative, however. By investing right now in skills development and lifelong learning, businesses can ensure their workers will have the tools to face these disruptions,” said the Hon. Perrin Beatty, President and CEO of the Canadian Chamber of Commerce. “Automation will change the way we work, but it also represents significant opportunity for the businesses that are ready.”

Waiting until after workers lose their jobs to automation and relying on traditional training programs could represent a significant cost to the Canadian economy, between $6 and $18 billion each year. By mapping out core, essential skills, making training programs more flexible and by starting now, Canada can make that amount more manageable.

“What we’ve found in preparing this report is that much of the retraining infrastructure is already in place. By leveraging on-the-job training and focusing on shorter programs, we can ensure Canada leads the way in adapting to automation and the changes it will bring,” said Patrick Snider, Director of Skills and Immigration Policy at the Canadian Chamber.
​
Properly harnessed, automation can represent greater production capacity, GDP growth and even job creation. That will require a concerted effort between workers, business, educational institutions and government.

Read the recommendations in Skills for an Automated Future