February 13, 2017
When Jennifer Plante briefly found herself working in the addictions and mental health field, she knew she’d made a misstep.

“I’ve always wanted to help people, but I realized then that front line service wasn’t for me,” the owner of Hot Impact Digital Advertising says. “I’m much better at enabling people who want to help themselves.”

It was the a-ha moment that allowed her to return to her previous work in marketing with renewed passion, even as her husband’s work at CN prompted a move to a new Canadian city. Plante began researching markets to see if there was a community with room left for an evolution in digital advertising.

“There’s a large presence for digital media in Ottawa and Montreal – very competitive, aggressive companies doing it on a large scale,” she says. “Similarly out west there is a company that has a large presence in Calgary, Edmonton and Vancouver. Winnipeg’s the untapped market.” 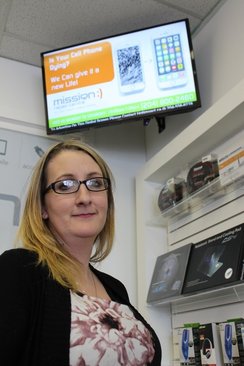 The digital advertising Plante’s referring to – and what she brings to Winnipeg with her company, Hotimpact Digital Advertising – is a series of linked indoor screens at high traffic venues. These “host locations” pay a minimal upfront fee for the screens, but then have access to Plante’s graphic design team, the rest of her network and a share of the profits from ads that run in their location.

It’s a deal that’s already paying off for the small business community Plante wants to support.

“We have a client who’s a chiropractor on Osborne,” she says. “He was there for four years and fairly quiet traffic-wise, so we turned his screens to face out the windows.”

“He’s gotten three times the clientele since the screens went on. I was there doing an update on a screen once and someone came inside asking ‘is this a new business? When did this open?’”

After eight months Hotimpact has almost 50 locations looped into their centrally controlled network. Hotimpact can control the various feeds from their own computers, customizing each screen based on its location, customer demographics – even the time of day.

It’s a degree of control that also lets Hotimpact run their business to support the community by helping business’ maximize their revenue.

“In major markets, the digital ad companies will take whoever is willing to pay. If two sub shops want to advertise on one screen, they take that money and that’s it.”

Hot Impact Digital Advertising gives exclusivity to the six locations a client chooses to run their ads, so their message isn’t in direct competition with a rival.

Given the point of sales boosts, shared revenue and referral bonuses Hotimpact’s clients are enjoying, it’s unlikely Plante will get to take a break from her work soon – but that suits her fine.

“I love meeting people, hearing stories of them growing and watching their business flourish,” says Plante, who also offers branding, website and graphic support through Hot Impact. “Helping people, being creative and marketing great ideas – my work combines all of my passions now.”