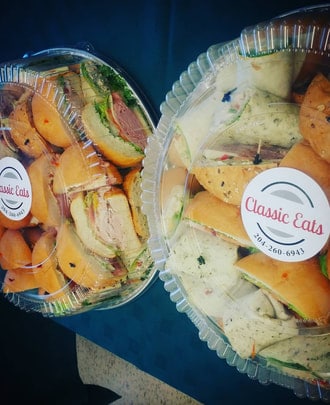 When Brandy Bobier came out to The Winnipeg Chamber of Commerce’s ‘Chamber 101’ meeting in March – just a couple of months after joining The Chamber with her catering business Classic Eats – she was just looking to meet The Chamber staff and network a little with some other members.

Chamber 101’s are held monthly and serve as an introduction to The Winnipeg Chamber of Commerce and its staff, for new Chamber members or future members who want to learn a little bit more about The Chamber.

“Just to get introduced to everybody that I would be dealing with at The Chamber was really nice,” Bobier says. “It’s nice to be in a room with 20 or 30 other people and just go around the table and hear about what business everybody is in, what they’re doing, and what drew them to be a member, just like me.”

As with any Chamber event, a little (or a lot) networking is always an option, and Bobier did her share, chatting with and giving her business card to everyone there.

She was just about to leave when she spotted a group of three that she hadn’t spoken with yet. They were with Manitoba Hydro Telecom.

“I just ran over and said, ‘Hey there, just wanted to quickly give you my card, let me know if you ever need lunch.’”

On a Wednesday two weeks later she received a call from Manitoba Hydro asking if she could provide lunch for 80 people on Friday. She had three more orders from people she met at the Chamber 101.

“That one order paid for my membership twice over,” Bobier says.
​
“The general networking that you get to do as a Chamber member is so valuable. When you go to these Chamber meetings, you kind of already have a bit of a rapport with the people you’re seeing there because you’re all members. And you just know that the people there are a little bit more viable, because they’re taking the steps to be involved with The Chamber.”

For more information on Chamber 101 meetings, or to register for our next Chamber 101 on June 18, click here. ​