April 24, 2018
The following piece was written by Phil Gass for International Institute for Sustainable Development April 17, 2018
“Fossil fuels are so much cheaper than renewable energy!”
“Renewable energy destabilizes the electricity grid!”
“Carbon pricing is just a way for a government to place a tax on everything!”Chances are, if you have stumbled upon this blog post, you have also stumbled upon some of these statements. Perhaps in local media, or over dinner table conversation, or in a tweet with the hashtag #FakeNews. 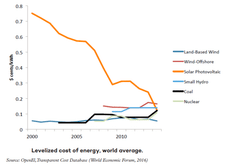 You have likely heard this one before—some version of a statement that natural gas and coal are so cheap that renewables don’t make sense and will only cause us to pay more for our energy.
​
Reality

This may have been true a decade ago, but not anymore. The cost of global renewables, (especially solar power) is plummeting (Figure 1) to the point where they now are on par with each other. Meanwhile, the cost of coal power is increasing around the world, as carbon pricing places a true cost on the pollution and health impacts from burning coal.

Furthermore, the fossil fuel sector’s dirty secret is that it is massively subsidized, which is part of the reason why fossil fuels are cheap. In Canada alone, over CAD $3 billion in subsidies support the production of oil and gas (Figure 2). Without these subsidies, the true cost of fossil fuels is actually much higher. What’s worse: these subsidies are paid with public money coming out of your pocket that could be better used to support clean energy, hospitals, schools, or just given back to you in lower taxes.

This argument holds that if there are too many intermittent renewables on the grid, utilities will be unable to meet demand—for example, during peak times, if the wind doesn’t blow or the sun doesn’t shine.

While it is true that renewable energy is intermittent, the more you build across a wider area, the better your odds are of getting strong average production. The sun is always shining somewhere, and the wind is always blowing somewhere. Besides, there are also battery technologies to store energy, as well as more predictable renewables such as hydropower, where water can be held back to support times of peak production, and biomass, where as long as you secure supply, you can always keep the lights on. Hydroelectric systems dominate energy storage capacity worldwide. 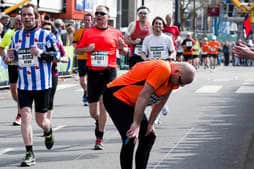 This myth takes one of two forms: either 1) carbon pricing doesn’t reduce emissions at all, or; 2) it only reduces emissions if a carbon price is several hundred dollars per tonne.

Quite simply, this is wrong.

Multiple academic studies show carbon pricing does work, even at relatively low levels. Several of these studies have looked at the carbon tax in British Columbia, Canada, and shown marked improvement in per capita fuel consumption and reduction in greenhouse gasses since the carbon price came in (Elgie and McClay [2013], Rivers and Schaufele [2012], Duke University [2015]). In addition, the performance of the province’s economy has outpaced the Canadian average since the carbon price came in, further busting the myth of the “job-killing carbon tax.”

Besides, saying we shouldn’t implement a carbon tax just because it will only be a low rate and have a small initial impact is akin to saying “I have to train for a marathon, so there is no point in running a 5k.” We have to start somewhere.

​Myth 4: A carbon tax is just another tax on everything

The misconception here is that a carbon tax will just make everything more expensive.

The truth is that a carbon tax is a progressive tax, and an avoidable one at that. You can avoid or reduce paying a carbon price by driving less or buying a more fuel-efficient vehicle or keeping your thermostat at 19°C instead of 23°C.

In many jurisdictions, such as British Columbia and Alberta, residents have benefitted from associated tax rebates and reductions to the point that the average person actually pays less tax than they did before the carbon tax came into place, and, as mentioned above, they can now control how much they pay.

In British Columbia, the government lowered income tax rates to offset the impact of the carbon tax. You can avoid a carbon tax by buying less gasoline—you can’t avoid paying your income tax. Finally, a carbon price also focuses on raising prices on things that are bad (pollution) and can make things that are good (income, jobs, renewable energy) more affordable, depending on how the revenue is spent.