Breaking barriers in a Middle Eastern cafe in Winnipeg

Glowing lights and rich scents greet customers as they step into Arabesque Hookah Café and Restaurant on Winnipeg’s Corydon Avenue. That’s followed shortly by warm welcomes from either Heba Abd El Hamid or Mohammed Naser, the restaurant’s co-owners. The two came together in 2016 to bring a icon of the Middle East to the Prairies.

“Hookah has always been a really large part of my culture,” explains Abd El Hamid as she prepares shisha for a customer. “It originates from Egypt back in the fifteenth century and it was more common amongst the aristocrats. Later on it became popular in what are called ahwahs, which are traditional coffee shops.”

“Men just sit there all day talking about politics, playing games and smoking their hookahs,” the Egyptian-born Abd El Hamid says as she finishes loading the top of a pipe with flavoured molasses. (Canada doesn’t permit tobacco hookahs.)

When she arrived in Winnipeg in 2012 to pursue a Master’s degree at the University of Manitoba, Abd El Hamid couldn’t find an existing hookah shop where she felt comfortable. Hence her decision to open Arabesque.

“Creating this space was perfect for me – it meant I could create a space where women felt comfortable and youth could be comfortable in this beautiful, vibrant environment where we brought together different parts of our cultures and traditions.”

She found a kindred spirit in Naser, a successful Palestinian contractor who fled Damascus when the Syrian civil war threatened to destroy his family. After a chance meeting with Abd El Hamid where they discovered a mutual wish to open a hookah restaurant, the two partnered on a project that has become his oasis in the sometimes frigid Manitoba capital. 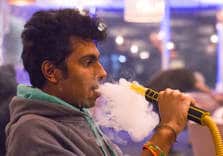 “We need all the customers to feel like they’re back in Syria, in the Middle East,” says Naser. “We make you feel like you’re in an old street in the Syrian capital, Damascus. You’re hungry, so you stop by Arabesque and you find authentic Syrian food and hookah.”

With a menu that features pistachio baklava, moutabbal, shawarma poutine and ma hamara manakeesh (pizza), it’s clear living up an outstanding culinary standard was a priority.

“We have those Syrian recipe that tastes like Syria. We make Syrian food in true Syrian style,” says Naser.