Analysis: Canada’s economy is booming, but will it last? 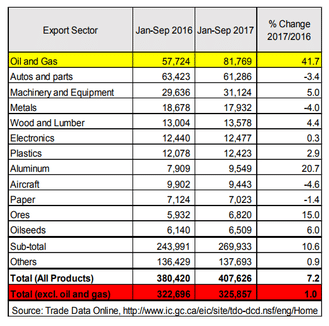 ​Boom! Canada hit 4.5% growth in the second quarter after a torrid 3.7% expansion in Q1! Sounds like growth in India, not a sleepy advanced economy. As a result, Canada’s deficit is lower than expected and the government announced additional spending. So is it time to stop worrying and pop the champagne?

There are four key drivers of this bonanza: (1) export growth thanks to the oil and gas sector; (2) consumption, because Canadians continue to borrow and spend like there is no tomorrow; (3) housing which saw the biggest gains in 8 years; and (4) a healthy gain in business investment. The question is whether these are likely to continue?

Firstly, Canada’s exports are set to rise 8% this year, which is superb, but is almost entirely driven by oil and gas sales which are up almost 42% so far this year (see chart on the following page). If you take out the petroleum sector, Canada’s exports grew just 1%.

But the export boom won’t last: the strong loonie and US weakness caused Q3 exports to fall 11.5%, while imports fell 7.1%. Net exports will be a drag on GDP growth for the rest of 2017.

Consumption will also slow down in Q3. Retail sales fell two months in a row (July and August). And job growth slowed: just 43K jobs were created in Q3, the weakest quarter in a year, with gains entirely in the self-employment category. Private sector employment fell for the first time since 2015.

Housing has been a powerful driver of growth, but the foreign buyer tax hit Canada’s largest and fastest growing real estate market in May. Toronto’s home sales have fallen 35% while prices were off 20%. The effects are likely to be temporary, as we saw in Vancouver, but will surely be felt in Q3.

The star of investment spending has been the recovery in the oil and gas sector but that is also facing tough times. The National Energy Board’s expanded focus on downstream emissions has created an effective moratorium on new energy projects. TransCanada finally pulled the plug on Energy East and in the last two years, $82 billion of investment has been cancelled.

So, we can expect a sharp downturn in exports and housing alongside much weaker consumption and business investment. Statistics Canada will release Q3 growth on December 1st and we expect it to be below 1%. What should we do? How do we keep growing?

Look around the world – these are exciting times in tax policy! France has just embarked on major tax reforms, with a 2017 budget that reduces or eliminates several business taxes, while lowering overall rates. The UK Government undertook a major tax reform effort last year, but backed away from the most contentious measures in April 2017. And in the US, Congressional Republicans are determined to press ahead with a biggest tax reform in 30 years, to slash the general corporate rate from 35% to 20% while eliminating certain tax credits.

What is Canada doing in the midst of our trading partners’ laser-like focus on competitiveness? We’ve just spent most of the summer in a ferocious battle over income sprinkling.

Instead, Canada could create an internationally competitive system of business taxation that rewards entrepreneurship, encourages businesses to invest in the technologies, skills, and capacity they need to grow, and attracts capital and highly qualified people from around the world. That would ensure Canadian growth for generations!

Post Contributed By: Michelle Gazze, Leadership Winnipeg Class of 2020-21 We are at an inflection point across the globe where many of us are thinking about how we can best…

Propel Your Business Towards Global Growth

The Trade Accelerator Program (TAP) is an intensive industry-led training program for current and prospective exporters. TAP is designed to accelerate the strategic development of your business, and to better…

Three new ways to introduce yourself

On October 29, Kerri Twigg will speak during our October Luncheon about Creating and Owning Your Business Story.  Before the Luncheon, she shared with us some insightful tips for you…

Post Contributed By: Harun Kibirige, Leadership Winnipeg Class of 2020-21 If there is one thing I believe in, it is the power of connectedness – a feeling and realization that…