September 27, 2017
Earlier this month, The Winnipeg Chamber of Commerce wrote to Premier Brian Pallister about the possible introduction of health care premiums to Manitoba. We’d like to share the content of that message with you (Text follows below). 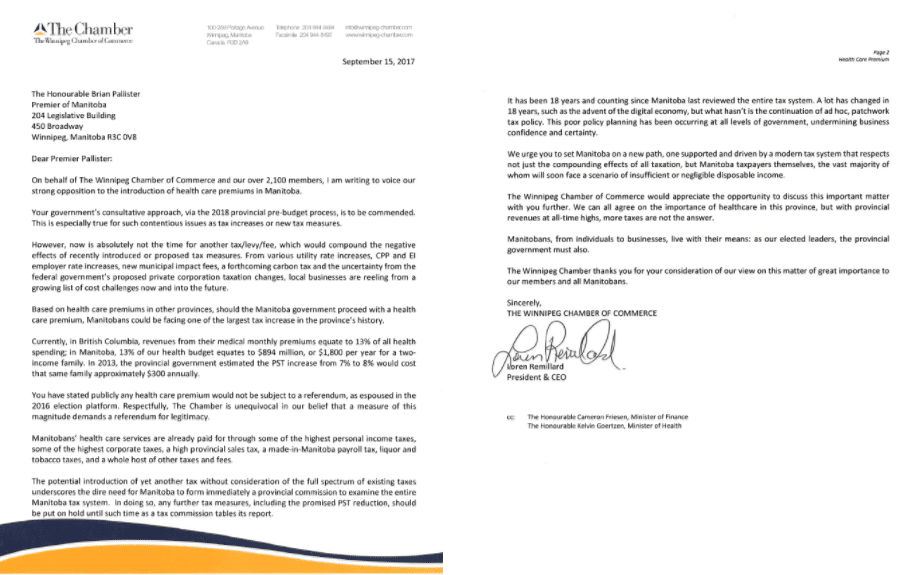 On behalf of The Winnipeg Chamber of Commerce and our over 2,100 members, I am writing to voice our strong opposition to the introduction of health care premiums in Manitoba.

Your government’s consultative approach, via the 2018 provincial pre-budget process, is to be commended. This is especially true for such contentious issues as tax increases or new tax measures.

However, now is absolutely not the time for another tax/levy/fee, which would compound the negative effects of recently introduced or proposed tax measures. From various utility rate increases, CPP and EI employer rate increases, new municipal impact fees, a forthcoming carbon tax and the uncertainty from the federal government’s proposed private corporation taxation changes, local businesses are reeling from a growing list of cost challenges now and into the future.

Currently in British Columbia, revenues from their medical monthly premiums equate to 13% of all health spending; in Manitoba, 13% of our health budget equates to $894 million or $1,800 per year for a two-income family. In 2013, the provincial government estimated the PST increase from 7% to 8% would cost that same family approximately $300 annually.

You have stated publicly any health care premium would not be subject to a referendum, as espoused in the 2016 election platform. Respectfully, The Chamber is unequivocal in our belief that a measure of this magnitude demands a referendum for legitimacy.

Manitobans’ health care services are already paid for through some of the highest personal income taxes, some of the highest corporate taxes, a high provincial sales tax, a made-in-Manitoba payroll tax, liquor and tobacco taxes, and whole host of other taxes and fees.

The potential introduction of yet another tax without consideration of the full spectrum of existing taxes underscores the dire need for Manitoba to form immediately a provincial commission to examine the entire Manitoba tax system. In doing so, any further tax measures, including the promised PST reduction, should be put on hold until such time as a tax commission tables its report.
​
It has been 18 years and counting since Manitoba last reviewed the entire tax system.  A lot has changed in 18 years, such as the advent of the digital economy, but what hasn’t is the continuation of ad hoc, patchwork tax policy. This poor policy planning has been occurring at all levels of government, undermining business confidence and certainty.

We urge you to set Manitoba on a new path, one supported and driven by a modern tax system that respects not just the compounding effects of all taxation, but Manitoban taxpayers themselves, the vast majority of whom will soon face a scenario of insufficient or negligible disposable income.

The Winnipeg Chamber of Commerce would appreciate the opportunity to discuss this important matter with you further. We can all agree on the importance of healthcare in this province, but with provincial revenues at all-time highs, more taxes are not the answer.

Manitobans, from individuals to businesses, live within their means: as our elected leaders, the provincial government must also.

The Winnipeg Chamber thanks you for your consideration of our view on this matter of great importance to our members and all Manitobans.

Loren Remillard
President and CEO, The Winnipeg Chamber of Commerce

The Winnipeg Chamber of Commerce encourages all to submit their views on health premiums to the province at: http://www.manitoba.ca/makingchoices/survey.html
Subscribe to Winnipeg Chamber e-news
Share